A Confederacy of Loss

Some days ago I received the horrible news that Harry Fassl had died. Harry was an artist. The kind of artist who produces work that people hang on their walls. His work was striking and unique and, sometimes, genuinely unsettling. He seemed to work mainly in the field of fantasy and horror, illustrating many a genre short story.

Years ago, I was offered a deal from a small press to publish a number of my short stories. I was asked to name an artist. The first name that popped into my head was Harry's. He'd illustrated one of my stories in Mark Rainey's Deathrealm Magazine and I was a big admirer of his work. So I got in touch with Harry and he agreed to do the cover and interior illustrations.

The book was called A CONFEDERACY OF HORRORS. I had it set up in sections with stories that were tied loosely together by a vague but common theme. Such as: "A Confederacy of Blood" and "A Confederacy of Obsession" and so on. There were five sections. Harry nailed them all. He had that talent. I could not have asked for a finer collaborator. But of course I knew that when I asked him to do the project.

Interior illustrations by Harry Fassl.
As it happened, the book never saw print. The publisher turned out to be a total flake and I offered the collection to someone else, who initially accepted it and then, as they say, went silent. Since those days, I would dust the project off from time to time and send it out. It had a great introduction by Steve Bissette, and of course those priceless Harry Fassl illustrations. And now, it will likely never see print.

Maybe a similar collection of my stories will someday see the light of day, but not that one--not the one with Harry's amazing cover and fantastically effective interior illustrations. Because Harry's not here, anymore. He took ill at his father's 80th birthday celebration and had to be rushed to the hospital. He died there, apparently from influenza.

He will be missed by his family and his loved ones. He will be missed by those who knew him far better than I; who only met him in person once and who shared maybe a dozen phone calls with him. But we were all robbed. For we'll not only miss our chance to meet him again, but to see what amazing images he would definitely have concocted in his studio filled with bits and pieces of our world, images shot with imagination and intelligence. 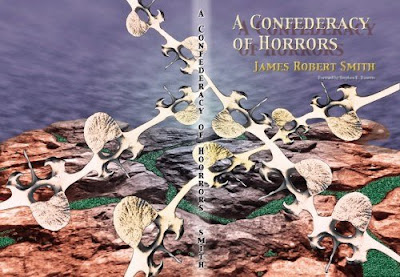 What was to have been the dust jacket for A CONFEDERACY OF HORRORS.
Posted by James Robert Smith at 11:32 AM

Email ThisBlogThis!Share to TwitterShare to FacebookShare to Pinterest
Labels: A CONFEDERACY OF HORRORS, Harry Fassl

I came over to see the horror host entry. Ah, Harry. I do recognize at least one of those illos, the one with the skeleton. Harry had this incredible setup in his basement and there were always works in progress scattered in various nooks. Since he died I've been feeling scared quite often.

When you told me that he'd died, I was stunned. Quite literally. I didn't know him all that well--met him in person the once and exchanged maybe ten or twelve phone calls. Plus some emails. That was it. But he was such a sweet guy those occasions. And the talent...that we'll all miss.