For many, many reasons, 2008 has been one of the worst years for me as far as hiking and backpacking are concerned. In fact, I went on only one extended backpacking trip in 2008, and that one was merely an overnight backpack into Linville Gorge. It just was not my year for hiking. Basically, it totally sucked chimp ass.

In about a week, Carole and I are heading back to one of our favorite places where I'll finally get to do some decent hiking. We're going to stay at the Peaks of Otter Lodge. I've done a lot of hiking there, but there are still many peaks to summit within a few miles of the lodge.

I like this area for a lot of reasons, not least of which are the wonderful cove hardwood forests that seem to cloak just about every peak and valley in the vicinity. The hemlocks there are all dead, of course, as this was one of the first places where the adelgid ended up causing 100% mortality in the hemlock forests. You just won't find any living hemlock groves around there.

If you're ever considering a stay along that part of the Blue Ridge Parkway, I highly recommend the Peaks of Otter Lodge. The rooms are very comfortable, but you won't have a phone or a TV, much less cell service or cable. This place is for quiet and relaxation. That, you'll find in abundance.

At any rate, it's going to be a welcome break from work and an opportunity to bag some peaks that have been on my to-do list for some time. 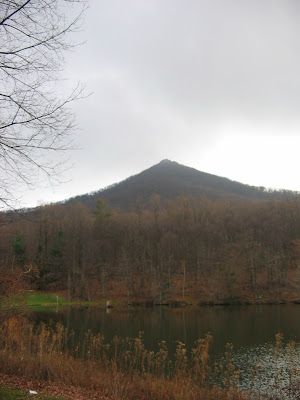 It was late in the afternoon when we got settled in to our room. This was the view just outside our patio. I'm a very antsy person and I can't stand to hold still. So I decided to hike to the top of this peak and try to get back down before night fell. I told Carole I was going to summit Sharp Top, and headed off. 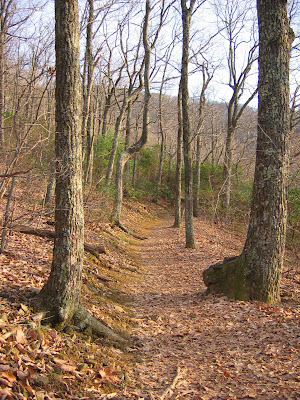 Soon into the hike, I was zooming along on an easy grade. 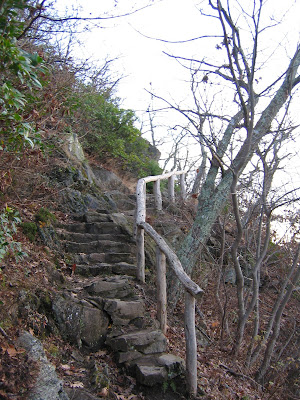 The trail to the summit of Sharp Top is really nice. I'm figuring it was engineered and constructed by FDR's wonderful CCC. 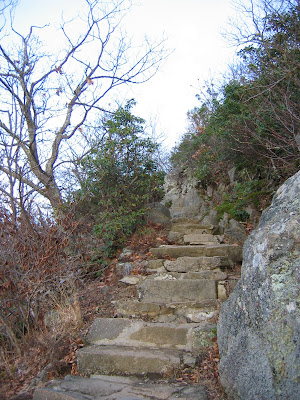 On some of the steeper sections there are stairs. 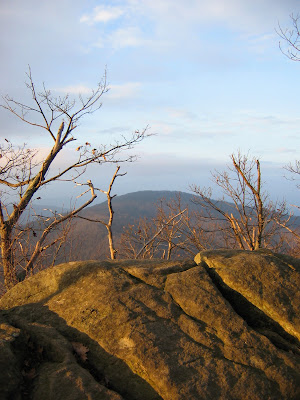 This was one of my first good views as I broke out of the trees onto some exposed rocks. The afternoon sun was beginning to tint the landscape whenever it would peek out from behind the clouds. 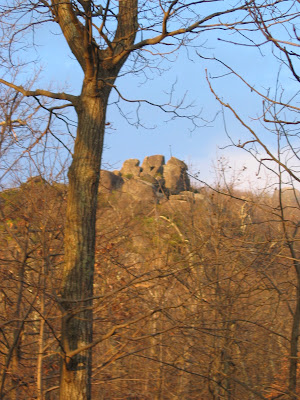 Finally I got my first look at the summit area. This is a sub-peak called Buzzard Rocks. One of probably thousands of places in North America called "Buzzard Rocks". 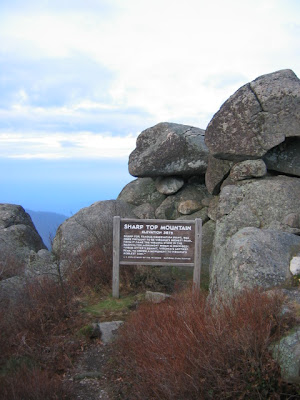 A sign near the very top. It explains, among other things, how this mountain was once considered the highest in Virginia. Not only is it more than 1600 feet shorter than Virginia's true highest peak, it's not even as high as one of its nearby neighbors, the weirdly named Flat Top. 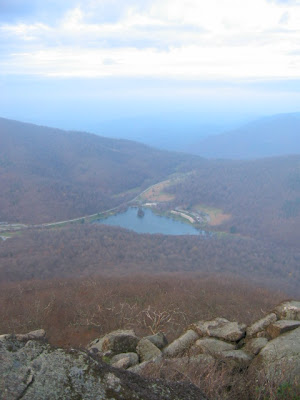 From the summit, I look down more than 1500 vertical feet at the Peaks of Otter Lodge and the lake on which it sits (and from whence I'd started my hike). 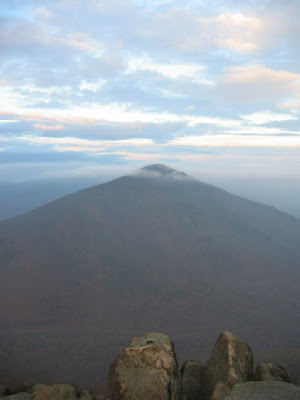 Flat Top Mountain, which is even more "sharp" topped than Sharp Top. Why the name? Hell if I know! 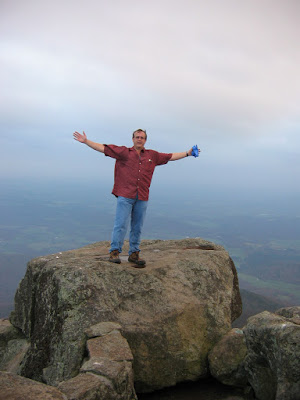 Self portrait on the very highest speck of the summit. 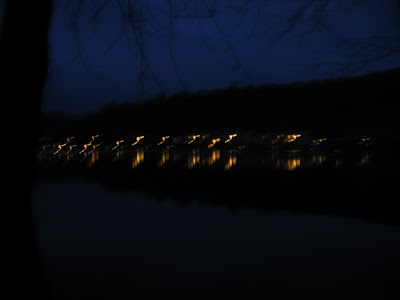 Blurry photo, yes. But I just wanted to show that I did not beat the fall of darkness back to the lodge. The sun set just as I reached the foot of the mountain and had to hike the trail around the lake back to our room. 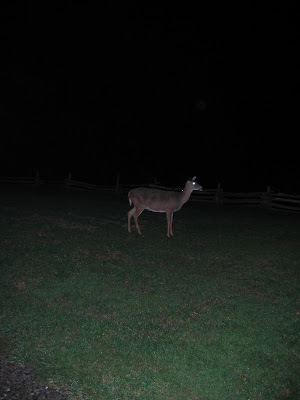 I saw this deer as I got back to the patio. The place is quite literally lousy with white-tailed deer. They know they can't be shot in this area, and congregate here in vast herds during hunting season.
Posted by James Robert Smith at 8:53 AM

Email ThisBlogThis!Share to TwitterShare to FacebookShare to Pinterest
Labels: Hiking, Peaks of Otter