All comic fans know that the Silver Age of comics began when DC made a concerted effort to revive the superhero genre by redesigning The Flash in Showcase Comics. It was a success, soon spinning off into a renewed title. They then followed suit by reviving a newly realized Green Lantern which was equally successful. Then followed things like the Justice League, etc.

Estranged from his editor at DC, Jack Kirby had retreated to working at Martin Goodman's outfit (which was not then called "Marvel"). He had been trying to talk his editor is allowing him to create superheroes at the nascent Marvel the way they had done it at DC (including Kirby's Challengers of the Unknown). Finally, with Goodman threatening to shut down the comics arm of his publishing business, Jack Kirby and Steve Ditko were given the task of creating, writing, and illustrating a raft of new superhero characters.

Kirby, of course, created most of what we would later call the Marvel Universe; and Steve Ditko also made tremendous contributions.

But Spider-Man and Dr. Strange were not the first superheroes that Steve Ditko created for a publisher. A full year before Kirby changed everything with his Fantastic Four, his co-worker had already had a hand in creating a new superhero for Charlton Comics:

Captain Atom was a classic superhero transformed by radiation into something more than human. In his case, he was Allen Adam, a technician who, accidentally launched into orbit in an experiment craft, has his body destroyed, but whose existence is altered by radiation so that he is able to reform his atoms and consciousness. His powers were explained as being of nuclear energy origins and he quickly becomes a super-powered agent for the US government. (If this sounds familiar, Alan Moore slightly altered the story for his own version of Captain Atom as Doctor Manhattan in the comic book THE WATCHMEN.)
The creation is officially shared between writer Joe Gill and Steve Ditko. But I have always wondered about the details and know nothing of them. I can only surmise from the collaborations between the two how much credit should be attributed between them. Sometimes it is obvious in Ditko stories that are credited to Gill that he, in creating the dialog, had almost no idea what Ditko had written--for the dialog sometimes bears no relation to the illustrated story! This is not the case with the Captain Atom tales, with the dialog generally being logical to the sequential storytelling, if somewhat campy and sophomoric.
But one thing that does stand out in these stories is the right wing politics and subtle philosophy that comes through. This aspect of the comics makes them classic neo-Fascist Ditko polemics. Yes, most politics in late 50s and early 60s comic books was right wing, but Ditko's take on politics is almost unique in the industry. That wacky sense of the sociopath as hero does glimmer between the cracks. And so I am left wondering if the writing was actually all Ditko, with only the dialog being from Joe Gill.
It would, of course, be a familiar story for Ditko and Kirby very soon after. 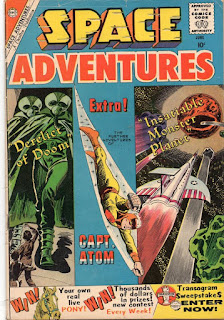 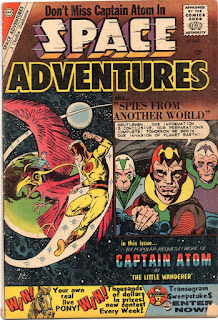 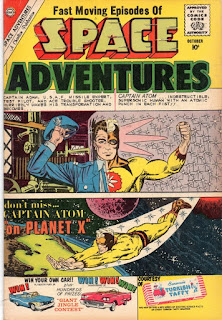 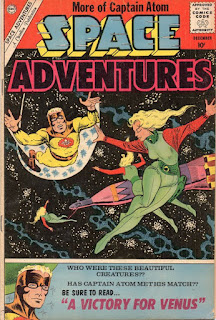 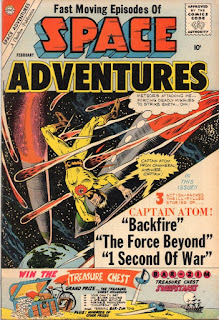 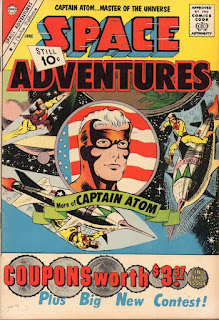 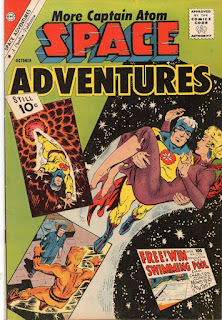