I wrote this as an excercise for setting mood for a haunted house novel, which I've plotted but have yet to write.


Except where the lawn was meticulously maintained, dark woods of spruce and hemlocks pressed in, often damp and dripping, always in shadow. At night, if you were about, and held your breath (as you would do if you found yourself in that place), you would hear the forest floor tic with the odd movement of small things. Leaves and needles, dead and somehow dry despite the dampness of the oppressive woods, would clatter startlingly either in wind, or perturbed by other means. Sometimes, if one were particularly alert and very fearful, the sounds of crunching leaves would assail one’s ears. And small sticks would crack like tiny, brittle bones. Larger limbs, too, would snap nearby as something more substantial than expected moved boldly toward the listener.

If, just before fleeing to the expected safety of that little house sitting in the middle of that storybook patch of green lawn, you listened closely, you would hear something sigh. Or sometimes you would hear something groan, almost human, perhaps birdlike, perhaps not. If you turned your prickling back to those woods to retreat to the supposed security of four walls standing rigidly, fearfully, awaiting whatever those dark woods may ultimately disgorge, you might hear something speak. You would tell yourself that it was not speech, but you would be telling yourself lies.

And then, then, you would run, hoping to outpace whatever was in those woods, whatever had snapped those dry sticks like brittle bones, whatever had trilled from the darkness, had moaned from the shadows, had muttered weirdly from those deeps. You would run to that strange house with the solid walls and doors that fit snugly, and you would think yourself secure.

How wrong you would be. 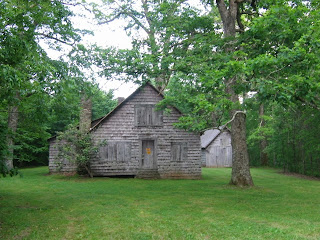 Email ThisBlogThis!Share to TwitterShare to FacebookShare to Pinterest
Labels: Haunted house, On writing